In 2008 I followed the Bio Art Honours Class at the University of Leiden. For this very interesting course I’ve made two art projects. One was called ‘1000 RPM Bestiality, or Making Love in the Next Century?’, of which unfortunately no pictures were made.

The second project was a performance at the presentation day of the Honours Class, and consisted of David and I wearing high brain-hats connected to our heads, thereby representing the high society, who have the means to upgrade their human capabilities. 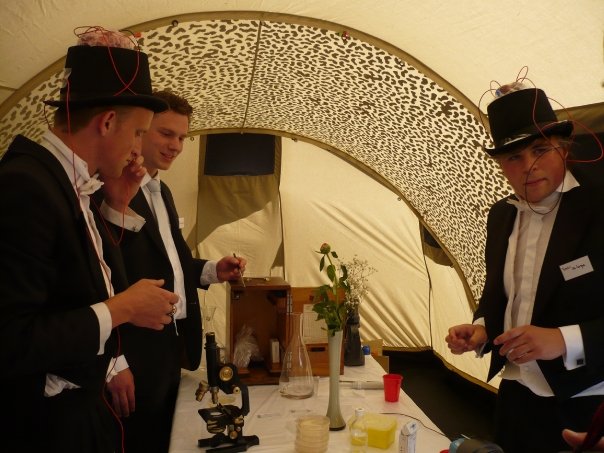 I also made a short video with some footage shot at the labs.

Besides these projects, I’ve also written a paper, which can be read below.

The Importance of Art in Times of Profound Technological Change

For ages people have been emphasizing the fact that they are very different from other animals. Indeed, the human race has developed an essential feature which other species lack: technology. The winners of evolutional struggle, the species that survive, have always been the species that can adjust themselves the best to their environment. With technology though, the human race has the ability to adjust their environment to themselves. Thousands of years ago people found out that plants started to grow at the places where they left seeds or fruit thousands of years and a couple of weeks ago. They used this knowledge to grow plants themselves: agriculture was born. No longer were they dependent of the fruit and seeds they found in their territory. People gained control over their environment.

We live in very different times now. It’s almost impossible to imagine a life without technology; it has become a huge factor in our daily life. Not only by using our mobile phone and typing essays, and stuff like that. Also, our knowledge today is the result of various technologies which introduced new ways of communication. Without typography science would have been utterly different. Without the introduction of telegraph, people would hardly know anything about other people that do not live in a radius of a couple of miles away from them.

Not only is the role of technology in our society enormous, it is also increasing very fast. In his book ‘The Singularity is Near – When Humans transcend Biology’, Ray Kurzweil argues that the pace of technological progress is increasing itself. People tend to think of human development as a linear progress. The essential point of Kurzweil however, is that it is exponential. In the first period, an exponential curve kind of resembles a linear curve, that’s why we have the illusion that technological events follow each other at the same tempo. Eventually though, the exponential curve explodes, and the slope of the curve goes to infinity.

Kurzweil shows that this is the case for the speed of processors and the amount of Random Access Memory (RAM), for example, as well as at the meta-level. He shows that, in the language of Kuhn, paradigm shifts are following each other up at an increasingly less amount of time. He plots these shifts and shows that they have an exponential character. It is remarkable how much faster we have accepted mobile phones than we did with the ordinary phone. Or how much longer it took to invent the domestication of fire than to use the steam machine in the Industrial Revolution. The discoverers of the DNA molecule thought It would take many decades or even centuries, to decipher the entire genome. The techniques to do it though, became much smarter and required a lot less work. Much sooner than the inventors predicted the entire DNA-molecule became known to mankind.

According to Kurzweil, humanity at the onset of the twenty-first century, “stands on the verge of the most transforming and thrilling period in its history. It will be an era in which the very nature of what it means to be human will be both enriched and challenged as our species breaks the shackles of its genetic legacy and achieves inconceivable heights of intelligence, material progress, and longevity.”

I certainly have my doubts about the predictions by Kurzweil.  First of all, he is an absolute optimist, he believes in the good of human beings like no other. He pays almost no attention to what is often referred to as ‘the problem of evil’. Also, to make his predictions of technological breakthroughs come true, we’d really have to hurry. He believes that people can, in a few decades, live as long as they want to. He believes that he can make it until his most bizarre, final destiny of the human species (By the way, he actually takes, literally, hundreds of supplements a day to stay in good health), the Singularity. At the Singularity, the exponential curve is nearly vertical and eventually every second technological process doubles itself. People (that is: the transhuman, Homo Sapiens 2.0, whit brains coupled with other computational devices etc.) undergo paradigm shifts in an ever shortening time, without even really notices. This prediction is quite beyond everything, but definitely beyond the scope of this essay.

I do believe though that the human race is at a crucial point of time. In the near future, there are going to be profound social and philosophical changes. We saw that human are different from other animals, because of technology. Instead of changing our species by the slow progress of evolution to the environment, technology enabled us to adjust the environment to our self. But now we are beginning to really understand the human body we can actually take the role of evolution and change ourselves to be more suitable for our environment.

The technological progress where Kurzweil mainly focuses on is the emergence of Artificial Intelligence (AI). He does not, however, see this in a science-fiction way where the computers take over the world or something. He sees possibilities to extend the human brain by adding external memory devices or calculating devices. Humans become Cyborgs. According to the book ‘Natural Born Cyborgs’, by Andy Clark we already are. The following illustrates that point. When you walk across the street and somebody asks you whether you know what time it is. What often happens is that you say ‘yes’, then look at your watch and tell what time it is. So you say you know what time it is, even when you haven’t seen your watch. Clark can see the same thing happen in the near future when somebody asks you whether you know Schrodinger’s equation. You say ‘yes’, use a device with which you can quickly look it up, which is perhaps controlled mentally, and tell him the Schrodinger equation. The essential point is that the device works very transparent, as Clark calls it. If that is the case, these things can be seen as part of your mind. A piece of paper is also part of your mind, if you use it to solve mathematical equations, according to Clark.

Although biotechnology and AI can be seen as two separate things, they share a main idea. With biotechnology we can give our children blue eyes, make them resistant to some diseases, increase their intelligence, or give him better sight. There has been a lot of ethical discussion about making pure aesthetically adjustments to the human genome, such as choosing a colour of the eyes. I think the reason that the discussion has mostly been about these sort of decisions is because these are rather simple adjustments to make which can already be safely done. I think though, that in the near future, we can make far more profound changes in our genome and alter our intelligence, or our perception of the world. With AI and knowledge about the human brain we could combine them, let the brains cooperate with electronics, make an ‘augmented reality’, where the ‘real’ world is combined with extra information, or real-time communication with other brains. Both types of technology, AI and biotechnology give the possibility to alter and extend human beings and the mind in particular.

People are often afraid of the unfamiliar. It also is very logical when you look at it from the theory of evolution. There is fear too for the upcoming important technological changes. People are reluctant to buy genetically modified vegetables. Science-fiction movies have created mental images of the world taken over by computers, or by mutated, totally alien creatures which are the result of some bio-hazard. Or an evil dictator who makes everybody the same by altering their genome. Are these fears irrational or is there something to them?

Essential to most frightening science fiction is the complete alienation of human emotions. Power seeking, emotionless supercomputers that have us as their slaves. Mutated super-beings that have exterminated us. For some reason, there is never a place for human relationships the way we have them now. All this is really different from the views of Kurzweil or Clark. Although mankind is going to merge with electronics, we’ll be, like the song by Daft Punk, Human After All. A lot of this relies on the theory about the Plasticity of Mind by Paul Churchland. According to this theory that what makes the human mind so unique is the ability to adjust itself like nothing else. This gives the possibility of humanity in a transhuman society.

Another essential feature of this fear is the distribution of power. This seems quite reasonable when you take a look at history. These new technologies could be used by terrorists, or differences between rich and poor could get bigger. Since only the people higher on the social ladder have the means to study the new technologies and pay for the brain extensions or genetic adjustments. This could give rise to a gentleman culture where only the high society has the means to transcend to, as Kurzweil calls it, Homo Sapiens 2.0.

This brings me to the importance of art in all of this, since my outfit for the OutsideLaboratory has to do with this. We wear traditional, gentleman costumes with high brain-hats connected to our head. One way to interpret this is that it suggests the old gentleman culture, where science was done by the male high society. The extra brains are an upgrade of the human brains and mind. The brains on the high hats represent that only the high society has the means to ‘upgrade’ their human capabilities.

What is clear, is that there has to be an active debate about new technologies and all of its consequences, further than whether it’s right to choose the colour of the eyes of your child. The purpose of BioArt and related art forms is to take the fears that people have and raise discussions about them, to raise questions about the future and give people information about the technologies etc. The importance of art in this is to democratize the technologies.

I think this has all been said many times before. What I like to emphasize with this paper though is the place in technological progress where we are at this moment in time. Profound social and philosophical changes are being made today. An important question is what it means to be human in the future, since we’re going to change our genome and merge with electronical computing devices. And according to Kurzweil this is all going to happen at a mindboggling, increasingly fast pace. We’d better be ready for it.

Kurzweil, Ray, the Singularity is Near – When Humans Transcend Biology

Churchland, Paul, Scientific Realism and the Plasticity of Mind