Small research for the course Creative Research, about how people write the @-sign.

Is there a correlation between the age of a person and the degree of similarity of the @-sign and the person’s writing of it?

The results of this research show that there is a correlation between age and the ability to write the @-sign by hand. 50+ people are more likely to write a dissimilar @-sign than students. This is probably caused by age-dependent learning skills.

During my work at my tutor company  I’ve seen a lot of forms in which parents sign in their child for our services. These parents have children who are going to high school so are likely in the age range from 35-50. In the forms we ask, among other data, for an e-mail address. In these forms I often noticed the strange creations which, apparent to the place in the e-mail address, should represent the @-sign. Since i didn’t ever notice anything similar with fellow students or other young people, I formed the hypothesis that the ability to write a @-sign is age-dependent. I came to the following research question:

— Is there a correlation between the age of a person and the degree of similarity of the @-sign and the person’s writing of it? — 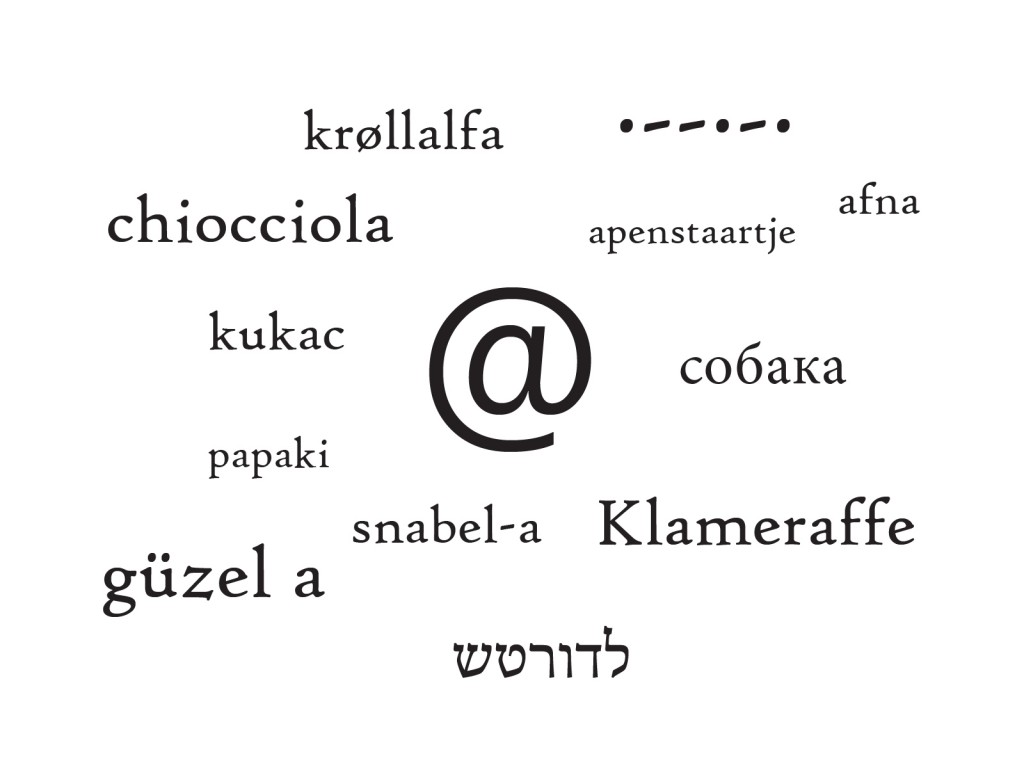 There is no real consensus about the origin of the @-sign. (1) Several theories have been made and the sign has been given several meanings over the years. One of the most important uses of the sign is in the world of accounting, where it has a a similar meaning as ‘at’ or ‘per’[1] (2). The sign was present in the first typewriters and from there became included in the ASCII character set.

In 1972 Roy Tomlinson chose the @-sign as a separator in e-mail addresses, where it had the meaning of ‘at’, or ‘located at’.  (3) Because of the Internet revolution the usage of the @-sign spread all over the world, even into language groups such as the Arabic or Japanese, which do not use the Latin alphabet. Since before, the sign was only used in specialist functions, lots of people did not know how to name the @. The sign has been given many, original names in the different languages. In many languages a reference has been made to monkeys, such as the Dutch ‘apestaartje’ (monkey’s tail), or the Slovenian ‘afna’ (monkey). In Italian it’s called a ‘chiocciola’ (snail) and in Swedish a ‘snaben-a’ ((elephant’s) trunk-a). In 2004 the sign has been added to the Morse language as a combination of an A and a C, forming the first change of the language after WWI.

The name of the sign is quite clear now in most languages. However, many people aren’t accustomed to writing a @ yet. This makes sense, considering the fact that many people started using Internet less than 15 years ago and are only since that time confronted with the sign. The deceasing of learning capabilities related with aging, supports the hypothesis that older people will have more trouble with the writing of the @-sign.

For this research I’ll make use of two different databases of handwritten @-signs. The first data is found in a set of 200 applying forms for HOVO, higher education for 50+ people by the University of Utrecht. This data also contains dates of birth. The second set is a list of 70 e-mail addresses written by international students for applying to ISN Leiden, the International Student Network. This data does not contain dates of birth, but it is known that all people are 25 years or younger.

The @-signs are photographed and isolated from the rest of the information on the forms. A small test group (4 people) is asked to give each @-sign a rating from 1 to 5 and fill that in a spreadsheet. The test group received the following instructions:
– Rate the handwritten @-sign on similarity to the sign in Arial. Do not base your decision on aesthetics.
– When you think the handwritten sign has all the characteristics of the model, rate the sign 5. When the sign does not share any characteristics with the typewritten version, and/or you cannot recognize the sign as a @, rate the sign 1.

The results of this research clearly show that there is a correlation between the age of a person and the capability to write a @. The cause of the correlation could be explained in several ways. Older people usually have less experience with computers, so possibly too with the @-sign. The introduction of the sign in mainstream culture is only about 15 years ago, so older generations were confronted with the  sign at a time when the learning skills are already decreased. There could also be an effect of age-dependent deficiencies in motor skills, or sloppy handwriting.

For  the HOVO program it is also possible to apply online. Computer experienced people would possibly choose this option more often than people with less computer experience. Since it is likely that the ability to write a @ and computer skills are correlated, there is a bias in this dataset.

Further research could be done by finding a better database in which people of all ages are part of. Then more could be set about the correlation between age and the ability of writing a @. Also, the data could be corrected for sloppy handwriting in general by letting the test group rate that too. It could also be interesting to experiment with giving people the instruction to write a @, so people would really try their best.