In the second project for New Media & New Technologies, I made a rock-paper-scissors game you can play using hand gestures. 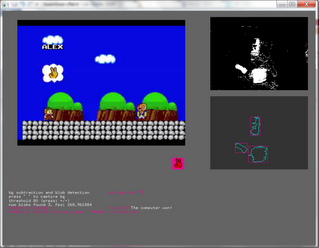 Alex Kidd in Miracle World is a video game from 1986 that I played quite a lot as a kid, the reason being that the game was actually built in the Sega Master System II.

At the end of some levels there was a boss who you had to fight in a rock-paper-scissors game (or a janken match, from the Japanese variation jan-ken-pon). There were two strategies for beating these bosses. The first is a combination of luck and having a lot lives to increase your odds. The second is actually learning the ‘random’ sequence of the opponents.

This project allows the user to replay these old janken matches in real life, using a webcam interface.

This project is made with OpenFrameWorks and the OpenCV library.